I Can Feel my Father Dying: Toxic Masculinity and the Fear of Potential by Harry Gallon 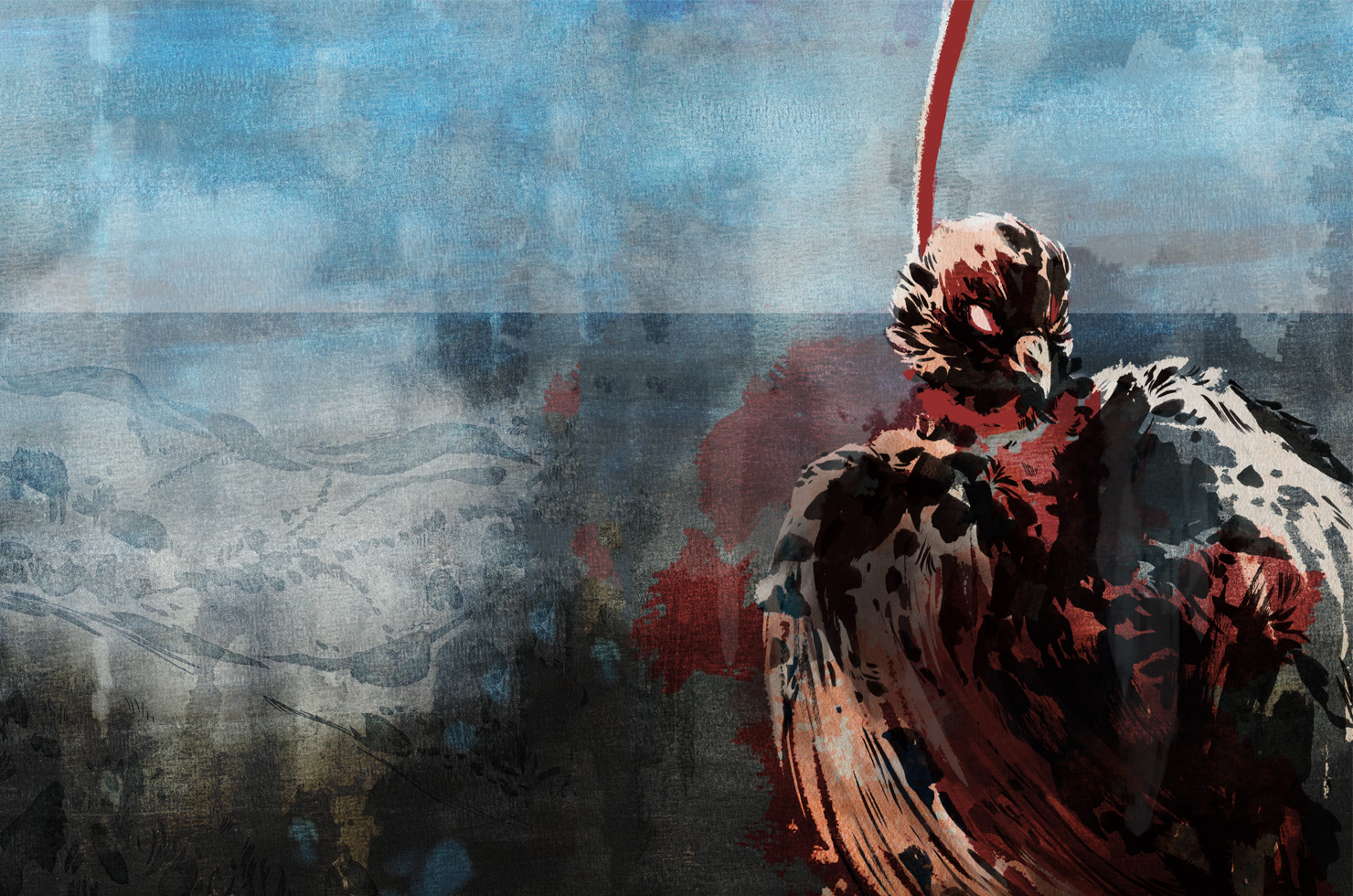 Writing is something I want to control. Writing is something I cannot. There are times when it feels like take take take. And, honestly, a very large part of me hates it. If I could come up with a way of skipping the time between deciding what to write about and having it written down, saved and backed up in front of me, I would use it in an instant.

Every Fox is a Rabid Fox was written in around four months. It was rewritten in seven. It was begun sometime towards the beginning of 2015, just before my first novel, The Shapes of Dogs’ Eyes, was accepted for publication by Dead Ink. Then it was paused for a year. Then it was restarted. It was going to be about what kind of breakfast cereal hitmen eat in the morning. Now it’s about potential.

I recently went back to my old university town to see a friend perform a one-man show he’d written. He’d been writing it for three years, finally took it to the Fringe in 2016 then closed it (at least for now) at the theatre we all used to work at while we were still studying. That was five years ago. His show is also about potential.

Potential is Frightening 1: We can all learn to drive a car, but you don’t have to pass a test to crash it into a tree. There is a tendency towards wrongdoing that is rooted in human nature. That’s why history can repeat itself so uncannily. A don’t-push-the-big-red-button curiosity. The protagonist in my new novel pushes it anyway, despite, contrarily, being terrified that he’s going to commit some kind of atrocity. He’s already done something that he thinks is bad. Now he lives every day beneath a cloud of imaginary police sirens, sure that sooner or later they’re going to come and take him away. I won’t tell you why, but it’s obviously quite crippling. He’s clearly suffering. But the difference between my protagonist and my friend is that whilst the former is scared he might do something bad, the latter is terrified he could do something good.

Potential is Frightening 2: “My beating heart knows nothing of time until it stops.” My friend is a poet. My friend is an actor. My friend sells… something from a small stall in a local Sainsbury’s superstore. He works in the same bar we worked at together during university. My friend stands at the front of a stage, addressing a 400 capacity auditorium while an intimate audience of 50 sit behind him. My friend, arms raised, gesticulating wildly, hesitates, sighs, says, “I’ve got nothing.” The auditorium is empty and so, too, apparently, is he.

Like my friend in his one-man show, I know exactly what I’ve got inside me. I can feel it. I can visualise it. I recognise my potential to build upon it but the actual task of transcribing it, even the thought of that task, is exhausting. Try and make yourself go for a run in the morning. Bed warm. Sunlight through blinds. Window. Cool air licking your face. The run itself, like the time spent writing, is usually easy. Fun. Releases endorphins. Builds up a sweat. But putting on the trainers, or getting out of bed and walking two metres to the desk, is daunting. Reminds me of being offered a job interview. Do I really want it? No, but I should. Doesn’t matter when they don’t give it to you. Overqualified, or under. Sounds pathetic. Sounds whiny.

My friend’s show is as much about his self-loathing and guilt as it is about his discontent. I love it. I feel it. We’re guilty because we’re lucky. Luck can permeate life. Being born male, for instance. And white. We have the time and support that enables us to work on things we care about, while a lot of people we know do not. Some of them work longer hours and still find the time. We’re guilty because we don’t do enough. We’re guilty because we don’t think that we help people. We aren’t teachers or social workers or volunteers. And yet we self-medicate with mantras like “Doing nothing – a large helping of tedium and dreaming – is essential to a writer’s creativity.” Hanif Kureshi said that, so you know that it’s valid, right? It’s the old, “I’m never not working” line that gives immediate comfort and respite from the nagging voice in your head that says no, you’ve not been stitched up by university. Not sold a lie instead of work opportunity.

But then what is more important than knowing you should be trying harder? Actually trying harder? Yes, probably. But it’s important to have something to work towards. Otherwise, what’ve you got? Contentment? That’s a dirty word, and my friend uses it a lot on stage. He also drinks a lot. He argues with a projection of himself on a screen a lot. He checks how much time is left and he feels guilty for having kept his audience waiting.

According to Edmund Burke, “Guilt was never a rational thing. It leaves a man no longer the free use of his reason. It puts him into confusion.” In Every Fox is a Rabid Fox, my protagonist is consumed by guilt. He holds himself up to a moral standard set by the strongest male influence in his childhood: his father. But that kind of Keep Calm and Carry On masculinity is warped. It’s outdated. My protagonist is caught between stasis and action, and is paralysed by the shame he feels for not being able to focus.

The immediate response to shame is to hide, which is what my protagonist does. He doesn’t talk to people. He slips further into versions of himself, and the different lives that they have led, in order to avoid coming to terms with the guilt that has caused his shame in the first place. But his guilt cannot be escaped from. His internal voice goes with him and constantly echoes the reminder that his guilt is defined not only by his being a survivor, but by his being a wrongdoer as well. You and I both know this is dangerous territory. This is how young men die.

My friend is certainly confused. He’s bemused. He’s frustrated and flustered. His whole show is a filibuster of self-deprecation and confession. Of craft beer happiness projection, of funerals, booze and dejection.

“As long as we were drinking, and the lights were on, it felt like no one had died.”

Unlike my protagonist, my friend is pouring outward his guilt, shame and energy, despite existing in a depressive state where immediacy and impatience demand an instant change that is impossible to obtain. Rambling narrative landscape punctured by bullet-hole vocal paralysis, where even the positive is negative.

You go to the pub and tell your friends how well your life is going, but none of you actually talk. It’s shame defined by universal, societal norms. And focus is on the gaze of other people, rather than how those people can help you. My protagonist finds it easier to say no. He doesn’t speak in a way that could help him. He denies everything. Projects. Alienates. Takes drugs [the wrong way]. He does what a lot of depressed young men do and chooses not to seek help. Yes, that’s pretty dangerous.

Potential is Frightening 3: Potential is empowering. My protagonist knows of a way to take control of the guilt and shame that hold him down. Guilt, as opposed to shame, cannot be hidden from. Resolution comes through atonement. Focus on the victim.

But what if the victim and the wrongdoer are the same?

Potential is Frightening 4: Potential is liberating. I’m not likening severe depression, anxiety and PTSD to my friend’s lethargy. They might be in the same family of themes, though. And I wanted to take those themes to a higher level in Every Fox is a Rabid Fox because they are important to me: a young man who has felt unable to talk about his problems, such as they are, at one time or another; even been denied the outpouring that my friend feels obliged to apologise for, during his hour-long early-life crisis. For someone who does make ‘art’ (that is, things which are validated by the positive affirmation of publishing houses, theatres or production companies), the presence of their potential to always be able to do so is comforting. Right? Is that right? Is it a safety net? Will it always be there? My friend will always be writing his one man show. Rewriting. Redrafting. And I’ll be sitting smugly, drinking my cup of decaffeinated green tea. Jesus. Migraines. Off the coffee. Thinking up reasons why I shouldn’t go for a run. Sharpening pencils. There’s something jangling round in my head. I think it’s another book.

The greatest tragedy, therefore, is that people like my protagonist have the potential to seek help, even if the resources available are poorly advertised or woefully underfunded. There are professionals willing. Available. But too often it’s easier not to, to just say no, rather than to try to understand that you deserve to be happy. To have that safety net. To know that things are going to be alright. My protagonist holds himself responsible for something he isn’t to blame for: his luck. And one way or the other, it destroys him.

Every Fox is a Rabid Fox is Harry’s second novel and we are currently raising the funds to print it on our crowdfunding page. Help us bring it to publication.