His Orchard – Andrew Michael Hurley on The Eden Book Society 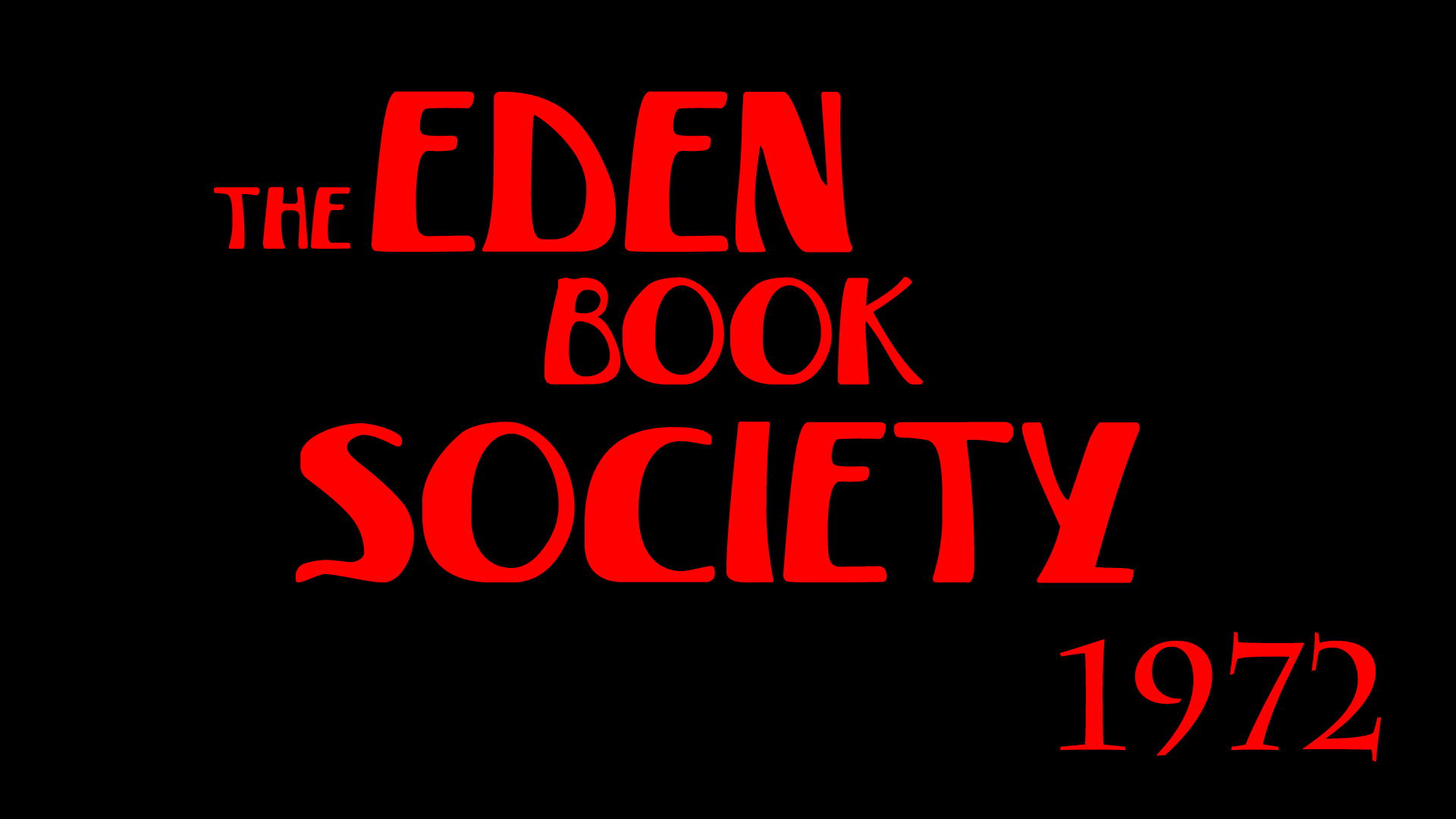 One of the joys of book collecting is not necessarily acquisition but pursuit, and assembling a full set of Eden Book Society (EBS) novellas is challenge enough for several lifetimes. When the publishing house closed in 2006, it had issued 522 books – six a year since 1919, when there were only two hundred and fifty subscribers as opposed to the thousands who were on the list at the end. It’s the editions from these early years that are notoriously hard to find. Of the “First Six”, as they’ve become known, the most sought-after is not EBS’s initial offering – Thomas Cowan’s A Vase of Black Roses – but the second: His Orchard, by C. Ashwood Burbidge, published in March, 1919. The interest is not only due to its rarity – out of the three hundred printed, only two copies have ever come up for auction and both were sold for close to five-figure sums – but that the identity of the novella’s author is one of the very few that has ever been disclosed.

All EBS books were written under pseudonyms, some of which were rumoured to belong to well-known writers of the time who wished to escape the confines of public taste. This may be true, though it is more likely that the authors of Thine is the Kingdom, The Blood Month, Broken Cradle and A Year of Plague – the other four of the “First Six” – were the kind of jobbing writers who contributed to the pages of (mostly American) magazines, like Morrison’s Sensational Stories, Fantastic Adventures and Argosy, and had a handful of pen names at their disposal. It’s possible, also, that some writers faded into obscurity, or rather into very ordinary lives.

Edwin Stamford, the real name of C. Ashwood Burbidge, was an insurance broker from Shrewsbury and as far as his family was concerned, his literary ambitions had been confined to writing poems inside his great-grandchildren’s birthday cards. Though when he died in 1979 a manuscript of a short novel with the title His Orchard was discovered in his handwriting. Being somewhat indecipherable and with several pages missing or scrawled with notes, the box of papers was shelved and forgotten about. It wasn’t until six years later, when BBC Radio 4 aired a documentary about EBS, that the Stamfords discovered how important Edwin’s story had been in establishing the imprint.

The communication between the family and EBS that followed shows how keen the Edens were to retain C. Ashwood Burbidge’s anonymity and, after numerous letters, the Stamfords were persuaded to keep the revelation to themselves. Though since the publishing house folded just over ten years ago, the family have been keen to bring His Orchard (and the correspondence about it) to a wider audience, not only to acknowledge Stamford’s work but to enable modern readers to begin to understand the moral and emotional complexities of his years as a soldier. The story was written in peace time but it is nonetheless a story about war.

Like many men of the 1890s generation, Stamford enlisted straightaway. He joined The King’s Shropshire Light Regiment, 1st Battalion and saw action during the Ypres salient offensive in 1915 and at the Battle of Flers-Courcelettes the following year, where he was shot in the thigh and eventually invalided back to England. The autumn of 1916 was spent recuperating in Compton House, Sherburn, Dorset and it was there that he met George Eden. Eden quickly recognised Stamford’s talents and although they went their separate ways when they had recovered from their injuries the two men wrote to one another frequently. In the letter dated January 10th 1918, Eden sets out his ideas for a new imprint “devoted to the blackest stories” and invites Stamford to send him something “suitable”. Stamford’s reply came in the form of His Orchard, which Eden edited and went on to publish the following year.

The novella’s narrator is eighteen-year-old Oliver Fitch who joins a group of fruit pickers in a Kentish orchard for the summer. Expecting cider, songs and his pick of lusty farm girls, he is disappointed to find the place dry and sombre with a palpable sense of fear hanging over the workers. They barely speak and when they do it is to mutter darkly about the master. He is on his way back to the farm. He will want to see that they are working hard. He does not tolerate laziness. The master’s deputy, a large man called Hart, oversees the operation and once the sun has gone down ensures that each worker has picked their allotted quota. Those who haven’t are taken to the glasshouse on the far side of the orchard. Here, various punishments are meted out by fellow workers, hooded and anonymous. The recipient of these often seems to be Harrow, a boy a few years younger than Fitch, rather naïve, with poor eyesight and legs bowed by rickets.

When one of the elderly women predicts a summer storm, the workers are forced to bring in the apples before the trees are flattened and the crop ruined. At the end of a feverish afternoon’s toiling in the orchard amid rising winds, Harrow and Fitch are tasked with taking the boxes of fruit to the storehouse. As the rain begins, the horse becomes frightened, overturns the cart and tramples the apples into the mud. Knowing that he will be taken to the glasshouse, Fitch blames Harrow saying that it was his whipping of the horse that caused the accident. Harrow is too inarticulate to gainsay the accusation and the others, terrified of the master’s wrath, are too desperate for a scapegoat. The next morning, when the storm has passed over, they find a tree that is still standing and hang the boy from one of the boughs.

It’s a deeply unsettling story because it touches on something which is ordinarily buried. In general life, says Stamford in one of his letters, “we have the luxury of feeling benevolent or empathetic towards our fellow beings, but war stills the pond. One sees clearly into the depths.” The horror in His Orchard originates in part from the willingness to do the bidding of a faceless authority and the power of threat to turn one person against another (phenomena that were not new, of course, but would come to be writ large in Nazi Germany and the Soviet Union) but also suggests that at the core of each individual is an instinct for survival that makes them incapable of true compassion. “Even the weeping widow,” says Stamford, “knows that in her heart she is glad that it is her husband, not her, who is lying in the box.”

In the novella, Stamford takes this a step further. Fitch is not only grateful that Harrow is dead instead of him but is able to justify his execution. “It’s doubtful that poor Harrow would have lasted another season. We knew that he would rather have someone take his place than see the farm suffer. He loved the orchard as we loved the orchard. That morning it was glorious to see him turning on the bough as we picked what was left after the storm and listened out for horses on the road.”

But to think of Fitch as having been brainwashed by the others would be too simple a reading of the story. He is joyful at still being alive, but also at the opportunity he has had to see his true nature revealed, a feeling that Stamford himself experienced on the front line time and again as he witnessed dying and death. “It seemed that I did not have to concern myself with any extraneous feelings of sorrow or pity,” he says. “It is the soldier’s secret. He thanks war for the beauty he finds in that moment of nakedness.” It’s desensitisation of a kind but not numbness. There is an exhilaration in the acknowledgment of the ego’s sovereignty. And perhaps this is all horror really is – the giving in to self and the giving up of love.

Help Dead Ink bring The Eden Book Society back to print by backing it on Kickstarter now.